Growing up the daughter of an automotive designer and pilot on an island just south of the home of Motown Music, the great Motor City, Detroit, Lyn was left with the influences that continue to shape her life to this day. A love for art, music, water, the outdoors and all things four legged, winged or wheeled – cars, trains, boats, planes. After returning from studying art in Melbourne, Australia, Lyn began a 25 year
career as an American illustrator and painter, garnering awards from the Oil Painters of America, Fine Art Connoisseur Magazine, the Society of Illustrators, the Art Directors Club, the Illustrators Workshops, and the American Institute of Graphic Arts, among others. Lyn’s early artistic influences were the great Illustrators of the Golden Age of Illustration and their contemporaries – the American and European painters of the late 1800s and early 20th century. She was captivated by not only the power of the images but their story-telling ability. Lyn takes the focus, energy and ability to respond in the moment required of plein air painting and uses it to inform and bring life to her studio work. Lyn’s devotion to painting en plein air takes her on the road for more than half the year before returning to her studio in Durango,
Colorado for the winter months. Her current passion, as a painting coach and instructor, focuses on projects that bring two of those worlds, art and music, together in a way that doesn’t make
either simply the soundtrack for the other. Rather, giving them equal billing in a quest to find the magic to create that new third thing. Her devotion to teaching began with nearly a decade as an illustration instructor and now continues through her workshops.
Lyn is an award winning plein air and studio oil painter with works that hang in private collections across the United States and continues a lifelong quest to both
create images that evoke and to pass the torch to future generations. 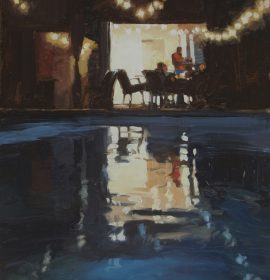