Brian was in the graphic design field for 30 years for various agencies and studios before his move into the fine art world, and is currently with two western art galleries A.Banks Gallery in Bozeman Montana and Lovetts Fine Gallery located in Tulsa Oklahoma and the Coeur dAlene Miniatures by the Lake Show. His aviation artwork is represented by Aviation Art Hangar based in MD. He has also been involved with local and national art shows, most notably the OPA National Art Show and Sale, Traveling The West Show, Mountain Oyster Club Show and Sale, Bosque Art Classic, The Out West Show and Sale, and Montana Miniatures Show as these national shows were by juried invitation only of the nations top artists. Within these shows, he has received recognition and honors which he proudly displays in his studio as a reminder that each piece has to be better than his last and to push himself and his craft as he continues to grow as an artist.

Brian has had one man art showings at Pinnell Art Gallery in Fallbrook CA and was a participant in the Fallbrook Art Centers Decade of Conflict Military Art Show in the summer of 2009. He also has his originals hanging at the United States Air Force Museum In Dayton OH, Selfridge ANGB in MIchigan, and Kirtland AFB in NM, as well as numerous private collectors of his work throughout the United States, Asia, and Europe.

I am an historical artist. Keeping our past in the present is how I like to think about what I do, ensuring that not only past generations remember historical figures and events, but also the upcoming generations that should know where we came from and where we may go based on this past. I did not call on the genre, it called on me – a calling that resides within me to this day, whatever subject that I chose to depict.

It has been this way since I was a child growing up in Dayton, Ohio in the early 1960s. My particular love of historical events from our past motivates my desire to keep alive the events within our nations history as well as world history. Native American culture within the old west is a favorite subject as this way of life and spiritual thought is something that fascinates me with my subjects depicted through hours of research and conversations with notable historians.

Military aviation and the men/women and machines flown within these events are also a favorite subject that I have been involved with for 30 years, and I am currently serving as the Vice President of the American Society of Aviation Artists (ASAA), a national group of select aviation artists dedicated to the preservation of military, naval, and historical events and have been an Artist Member for over 10 years. I have been honored with awards with my depictions of some of these historical based events over my tenure as well as being a presenter/instructor at the yearly forums which focuses on teaching select subject matter. 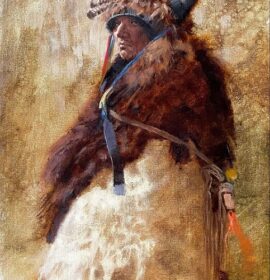