A Classically trained artist, Basa began painting at the young age of 8. Her early training still influences her as it is when she is painting en plein air that she is brought back to a time in her childhood when painting was pure and comes from someplace deep within.
Basa’s landscapes allure the viewer to move into the work with their radiant light and luminescent qualities reminiscent of the early Luminists and Tonalists of the American School. She is inspired by painters like Thomas Moran, George Inness and is continually striving to achieve a certain timelessness to her work.

A professional and full time artist since 2004, Basa participates in several national shows and have been invited to participate in prestigious events such as the American Masters at the Salmagundi Club in 2016 and 2018, Maynard Dixon Country show in 2009 , and the Gold Medal Shows of the California Art Club . She has won numerous awards including the 2018 Artists Choice Award at the American Masters Show at the Salmagundi Club in NY, the Art of the West award of Excellence at the California Art Club Gold Medal Show in 2012 and was the $15,000 Grand Prize Winner of the 1st Plein Air Magazine Online Salon also in 2012. Her Paintings have been a finalist in the Arc Salon Competition in 2015, 2017 and 2018 . She has also shown her works at the National Arts Club in New York, the Gilcrease Museum in Tulsa, OK, The National Cowboy Museum in Oklahoma City, OK, the Autry National Center , the USC Fischer Museum , the Frederick R. Weisman Museum of Art in Malibu, and the Museum of Natural History in Los Angeles California. Her works are also in the Permanent collections of the Academy Art Museum in Easton, MD. , the Cherokee Club of Atlanta, GA. , and the CM Russell Museum in Great Falls, MT. 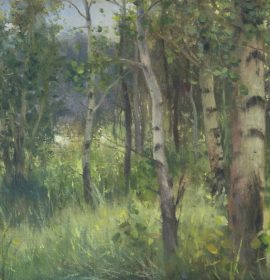