Lees Western paintings have been exhibited in galleries since 2010. His first major exhibition
was the 2015 Traveling the West Exhibition at the Southwest Gallery in Dallas, Texas. Major
collectors have purchased landscapes from his Monument Valley series and portraits of four
generations of one Navajo family living in the valley. His paintings appear regularly for auction
at The Russell in Great Falls, Montana, and have been juried into the Mountain Oyster Club
Western Art Show and Sale, American Plains Artists Juried Exhibition, and Southwest Art of the
Heartlands, as well as exhibitions in Park City, Utah and Jackson Hole, Wyoming.

Lee has been a speaker at the Center for Railroad Photography and Art annual conference. He
has been a judge for Southwest Art of the Heartlands, the Western Regional Oil Painters of
America Exhibition, and the National Oil and Acrylic Painters Association.

Buyers have also been collecting his Western paintings that have won over 15
national awards from the International Guild of Realism, Art Renewal Center, Southwest Art
Magazine, International Artists Magazine, and American Parks Competition. His work has also
been published in Western Art Collector, American Art Collector, and Fine Art Connoisseur. 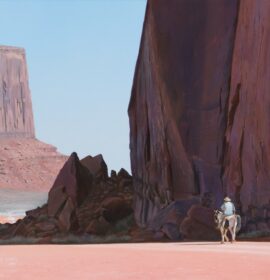 Next Artist
Back to Gallery